I’d be willing to bet that there are at least 10 things in your life right now that bug the living snot out of you. And not just that, but 10 reasonably minor, easily fixable things. Like that blinking light in your bathroom. Or the dead batteries in your doorbell. (I’m sharing my own silly examples below.) They may not be priorities, but now’s the time to tackle them.

Be honest, how many times have you come across something and thought, “I really must do something about that” before turning a blind eye and getting back to your more urgent tasks? They don’t seem like a big enough deal to drop everything else for, but they erode your patience and your enjoyment of your space nonetheless.

So one of the things I’m trying to get better at this year is noticing things that bug me and finding solutions to those problems. All those little annoyances in my daily life. Things that irk me, but never seem to be a big enough priority to tackle there and then. Nigglers, if you will.

They don’t even have to be DIY-related — I finally got up the courage to ask the postman his name, because not knowing it bugged me every morning when I greeted him. (Though, admittedly, I’ve since forgotten it. *sigh* I have a sucky memory.)

Here’s another silly example: In my bathroom, I have a corner cabinet where I keep my toiletries. I try to keep everything according to category (I know I know, people are lining up to be my friend), so all dental products are on one shelf, all body products on another. Well, on the top shelf, I have some miscellaneous items that I don’t use on a daily basis.

One of these is cotton pads and, beside them, I had put the two things I use them with — eye make-up remover and nail polish remover. But every time I went to remove my eyeliner I’d tell myself that someday I was going to pick up the wrong bottle and end up blinding myself.

Truth be told, I meant it as a little joke and would chuckle each time, knowing I’d never actually mix them up (though, given that I’ve previously tried to eat cereal with a fork, I’m not sure why I was so confident). But I noticed it was always on my mind every time I reached for the cotton pads. I’d double-check I wasn’t about to dissolve my eyeballs, and think, “I really should move the nail polish remover.”

And then one day I finally demoted it to the bottom shelf. And it was like a little weight was lifted.

I know it sounds ridiculous, but I hadn’t realised how much headspace that one silly thing was taking up until I did something about it. And it only took a second.

And now it’s your turn to free up some space in the hard drive in your head. 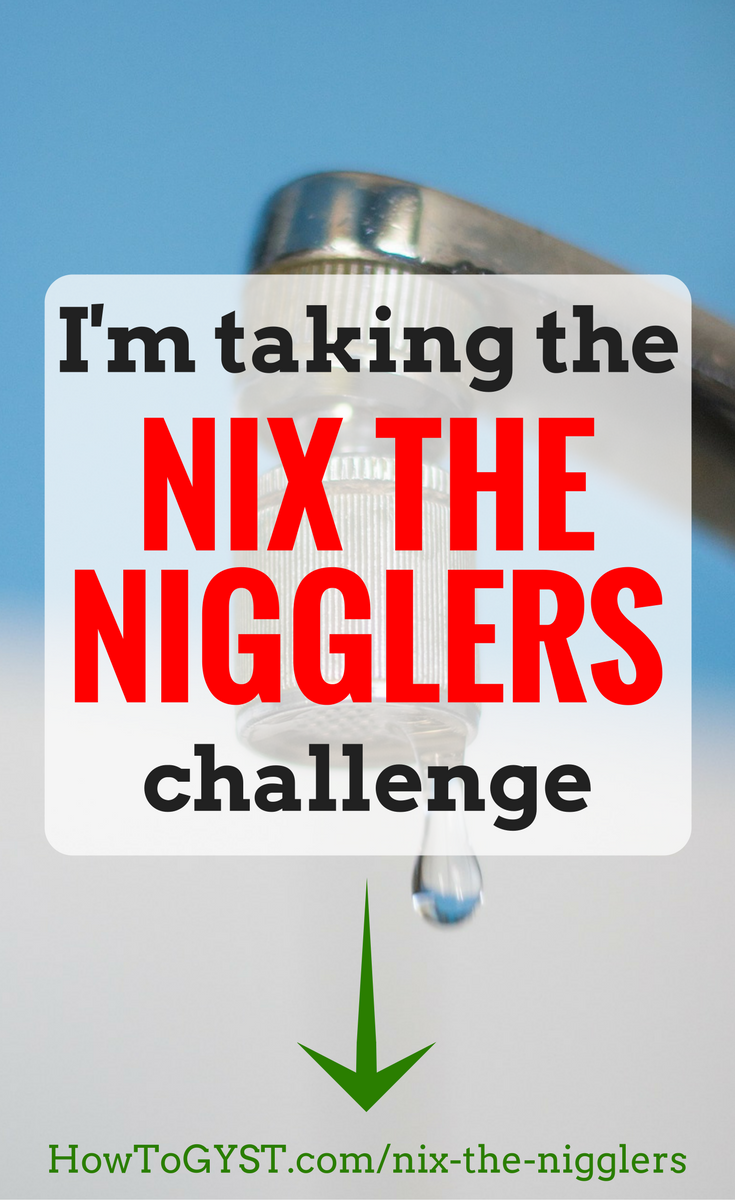 Life’s too short to spend frustrated at a squeaky door or leaky tap, and the job’s too small to justify putting it off indefinitely. So if there’s something you always silently comment on, make it a point to find a solution, even if it doesn’t seem like such a big deal. You may find that the big things are a lot more manageable when all those little hindrances are out of your head, or that the silly, small things have caused a snowball effect and you have enough motivation to carry you through to complete the larger tasks.

Like when you decide to tidy up the junk drawer and, before you know it, you’ve the whole kitchen re-organised.

Don’t let trifling things eat away at your subconscious until you find yourself snapping. Book a repairman, set aside five minutes, look up the instruction manual… Whatever you need to do to get it done.

It’s time to nix the nigglers once and for all.

What are the biggest nigglers in your life right now?

Keep Your Home Clean In < 5 Minutes

5 simple ways to keep your home clean in just 5 minutes a day?! I'm in! Bonus? No more panic when an unannounced guest calls!

Ready to get serious? In this e-course, you'll learn the step-by-step strategy to getting more done in less time, leaving you free to focus on what matters most to you.

Planning Your Most Productive Day

Let me take you step by step through planning your most productive day, so you can get ﻿more﻿ done in a lot less time... and then go put your feet up.

This site uses Akismet to reduce spam. Learn how your comment data is processed.